“State Trooper Using Hypnosis for Investigation” read the headline for one of the strangest cases I ever reported.

While working the “late shift” at the Pottstown Mercury, I heard the highly excited voices of police over a radio scanner describing a shooting and the words  “officer down.” It was moments before deadline for the newspaper, and I quickly called the Embreeville State Trooper Barracks in Chester County, Pennsylvania. The city editor pushed back the deadline and remade the front page, as I somehow gathered facts for an incredible story.

While stopping a possible stolen car, a state trooper fired his gun before being knocked unconscious by the driver who got away. He recovered after being treated and released, but was only able to remember part of the license plate number, and our paper with it’s 30,000-circulation printed a request for anyone with information matching a description of the car and the driver be provided the police.

It was exciting being a police reporter. On top of crimes — often as they were taking place. One of our staff members won a Pulitzer prize for “Spot News” photography when he responded to a similar “call” over a police scanner, drove to the crime scene, and took pictures of a crazed bearded man with blood streaked across a bare chest and bare-footed rushing toward with a knife in hand. Tom Kelly snapped the picture seconds before police arrested the man — Richard Greist — for killing his wife and cutting the fetus growing inside of her while attacking other family members. It took courage to snap the picture, placing his art, his craft and his job above his own safety. Kelly’s the type of person I’d want with me while life from a foxhole.

Many journalists would place the “story” above their own welfare, digging for details when they smelled corruption, and walking the extra mile for the downtrodden victim of a some tragedy, perhaps a fire or flood. My state trooper story grew into a little of both.

You see, I traced the state trooper to his home. By luck, I scanned the Yellow Pages and called the number of the fellow with the same name as the injured trooper. Voila! It was him! And, I got one of the greatest stories of the year. 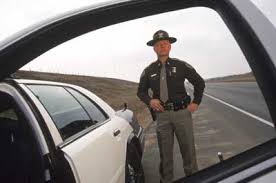 The trooper had agreed to undergo extensive hypnosis to try to help recall details of the incident. He shared the details with me, as I took notes on something called a “typewriter.” We did not transition to computers until the late 1970s, and I gathered facts the old fashioned way. By the stroke of a key noisily striking “copy” paper placed in an old Remington Typewriter.

What a fascinating story. I released it to the Associated Press and it went out internationally. How often do police resort to such tactics as part of an investigation, let alone reveal this to a public only awakening then to the hidden powers of the unconscious mind?

The story had “legs,” as we’d say in the business. Wrote four or five follow-up stories and was contacted by magazine and television reporters trying to get information about my source, with me declining to give up his name or number, my goose that was laying the golden egg.

The story died out, as most do, There was no mention of the incident until several months later. My paper gave the new twist the same coverage — the top story of the day. But, the tone was much more somber.

The state trooper was released from the force. He was to undergo psychological treatment as part of an agreement for no charges to be pressed against him for lying. The young man, new to the life as a law-enforcer, accidentally fired his gun. And rather than own up to such a mishap, he created this story to appease supervisors who demanded written reports when a weapon was discharged. It was a Big Lie, one that got bigger with his willingness to be hypnotized. A lie I helped to perpetuate each time I gave it play through my police reporting.

I learned the Truth could be manipulated at times, but that staying true to it was always the best policy in the long run. I hope the state trooper, no matter where he is today, had learned that same lesson.