Saw you off on your class trip, Nick, and while we parted on a bad note, I want to leave something to perhaps get the sour taste out of our mouths.

Today, April 6, 2010, I left you at Plymouth Whitemarsh High School (PA) after driving you there from the Central Montco (Montgomery County) Vo-Tech school, where you study auto mechanics. I made you pancakes with juice for breakfast, and gave you $5 for a yogurt, more juice and a glazed donut for lunch at Dunkin Donuts.

You were to pick up three T-shirts announcing the Class Trip of 2010, one for you, and one each for your mom and me. I paid by check ($10 each) and gave it to the counselor in charge of the trip. We joked in the hallway, but I said something that “set you off.”  And I apologize. Twenty-five years from now, you’ll look back and perhaps laugh, but I guess it was a little too sensitive for a parent to say to a teenager among his peers in his high school building.

“Make sure you put on clean underwear tomorrow,” I called out to you. It was a poor joke that one adult to another might have laughed at. But, I’ll never forget how you ran at me, crossing some 200 feet in a split second or two and told me in no uncertain words how inappropriate the comment had been. Looking back, I see how cruel it might have been in that setting. Unfortunately, that is part of my weird humor, and sometimes I forget that you’re still a teenager with feelings that I seem to have forgotten.

You’ll be a Disney World for five days following your flight later tonight. Hope you’ll get pictures to remind of you of this once in a lifetime event. Pictures of you with your friends, and not just of the sites you’ll have seen.

I never took pictures at my class trip. 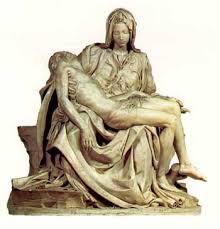 Our graduating class (no, Ben Franklin was not in same class) took a train from Philadelphia to New York City to see the World’s Fair. Won’t tell you the year. You’ll have to look it up. But I do remember the highlights. Seeing the “Pieta,” the pure white marble statue of Mary holding her son across her lap after he had died and was taken down from the cross. It was shone in all of its glory, as we 17- and 18-year-olds stood on a moving platform that slowly pulled us pass the magnificent statute by Michelangelo.

I also remember spending most of the day with “Pinky” McDermott, a girl in my class who never looked at me twice before then. Took her on one date following our “heart-to-heart” in New York. Saw a unmemorable movie, but got to know her in the lobby of the old Fox Theatre (now torn down), where she told me of an assault by a bunch of guys when she was younger. I wanted so much to console her, and still feel compassion for her decades later.

Have not seen nor heard from her these many years, but will always remember the class trip, Michelangelo and that wonderful day with “Pinky.”

I wonder what you will recall? I hope you will forget the “underwear” incident and discover your own “Pinky” as well as a masterpiece or two in your recollections.