Five hundred miles. Five hundred posts are just around the bend. I’m about to open myself 500 times to make sense of the world we share, while sharing a bit of the world I “sense” each day.

I copied articles about 50 times, including a post-a-day of the 37 Bodhisattva Practices as well as the commentary and introductory pieces. Found out I could rise to a higher level of consciousness simply by writing, editing, and then proof-reading the versus, seeing each word over and over again. I couldn’t help but feel in touch with a higher spirit while performing such a joyful task.

But, for the most part, I tried to be original. Provide a “ring of truth” in thoughts and ideas, giving credit to others as much as possible, as well as seeking out and giving encouragement to new talents entering the world of blogs. I offered a spiritual, but not necessarily a “religious” voice to the “market place of ideas.” Got angry almost weekly and let it show through PTSD articles on post traumatic stress. Took on small-minded persons planning to burn books or close immigration borders to minorities. Championed the empowerment of women every chance I got, and am hoping to challenge the top Kabbalist to elevate woman to “leading roles” in that spiritual theatre. Hey, we got women ministers and rabbis, not to mention “taras,” the female equivalent of a Buddha, and female deities throughout the Hindu religious lands. When will humanity see the need to be represented by both sexes among our Muslim brethren and the Kabbalistic ones, both groups seemingly unbending in their repression of women? 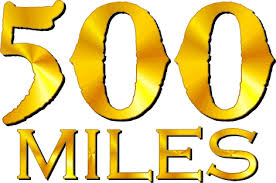 This will be post number 480. I’m trying to reach the 500 miles stone by Oct 1, 2010, just about a year after starting this effort last September. Effort‘s not a good choice of words. It’s been more like a love affair. I’ve been waking up early — 6 to 6:30 am — and getting morning chores done before meditating and “watching” ideas form. Inspiration might arise in one or two words. “Altar boy” would trigger a post from when I was 12 asking the Highest Authority to help another 12-year-old “like me, I mean really like me.”  My union activities would surface on seeing a word like “revenge,” reminding me how I waged war against management for being overlooked for a promotion and sought to “raise hell” while also raising the rights of newspaper reporters where I worked. (I showed ’em what disgruntled really meant.)

Found out the stories I liked best were ones where I looked deeper, to perhaps see some hurt in me, or of a hurt I caused another. I learned how to say “mea culpa” in several languages while prostrating myself on a floor with the best of Buddhists.

Tried writing in the first, second and third person, as well as the present and past tense, sometimes not knowing where a story would finally go until reaching the end and rearranging words to fit better. It’s fun. I like playing with words, phrases and sentences. Graphics soon became another aspect of communications. Did not know how to use “images” until half way through my 500 offerings. Got to like the”doubled flushed” look. That’s when all the sentences are flushed to the left and to the right as in most magazine columns.

Biggest problem was sticking to a self-imposed 500 word limit. Made it more than half the time. Missed it this time, but don’t hold it against me. I promise I’ll be more concise my next 500 posts.