I manifested as an African American riding a horse as a cowboy in the old American West.

Next, I felt the chains on my legs as I rowed in a galley ship as a Greek slave in a land governed by the Romans in some year BC.

Sand. Lots of sand with its rich mixture of roughness and tan properties became my next existence.

That was followed by my essence being made up as a piece of glass. A clear glass with a tint of green like the old-fashioned Coca Cola bottles.

Finally I envisioned myself turning into a Soldier of Love with healing powers I never knew existed.

Crazy? Does it sound like some LSD trip? Maybe  a magical mystery tour?

No, it was all part of a guided meditation — a journey — that was provided by a Russian psychologist who spoke his native language for some 25 of us in a workshop on Crisis, Depression and Death. A very jovial topic, that is, if you like gallows humor.

I understood no Russian. Nor could I be enlightened by the interpreter, a lass that spoke only in German for her mostly German-speaking audience, minus me. I had my very own translator who laid down beside me on a yoga mat as she whispered very close to my head what the Russian fellow was telling the German woman. 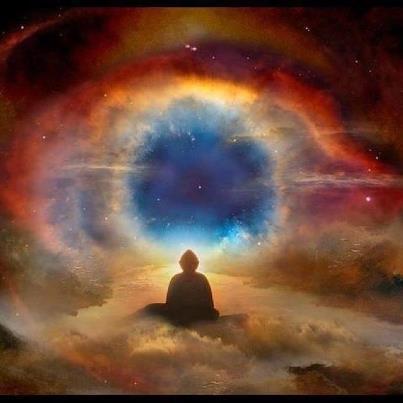 Journey into self starts with stillness and loving silence

Dr. Gennady Brevde of St. Petersburg, Russia, suggested that we all get small. I first imagined a dog like my favorite old pet, Willie. He then told us to get even smaller. And then smaller still.

I got so small that the “I” of me seemed to have disappeared and then reappeared in the one of the apparitions I described above. Could they have been flashes of my past lives?

I could almost smell the horse as I rode through the countryside of a place like Wichita, Kansas. (Don’t ask me why I came up with that town. Maybe I was there once upon a time!)

I could identify with the Greek slave being Greek myself. I always believed that I was a descendant of a slave and identified with my black brothers growing up in Philadelphia, Pennsylvania of the United States.

There was a synchronistic moment after the journey when I explained my trip to a young woman who had also taken part in the two-day symposium. Anna Dorn, a 26-year0ld social worker, shared the same experience. While chatting before a large fireplace in dining room of a building reserved by the International Institute for Consciousness and Psychotherapy,  she told me that she too saw herself as a slave on a ship.

I couldn’t believe it. It was the first time we had ever met, yet we shared the same vision, the same dream during breathwork with a guide playing soft music and interjecting random  suggestion to us. There we were, a senior from the United States and a young woman from Kehl, Germany, just ten minutes away from France, experiencing the same view of an oppressive life on the high seas.

Who would have ever thought it? Maybe we knew each other in a previous lifetime! This reminded me of something I read by Carl G Jung, the eminent Austrian psychologist who opened so many doors to my inner self. He spoke of “active imagination” and the “individuation process” where each of us can seek personal growth through a process of self-exploration. (That is why I am at this symposium and the ten-day Holotropic Breathwork training that will follow)

But what about the image of the grain or grains of sand turning into the colorful piece of glassware? I guess the Universe wanted to show me that I am connected to every part of the world, the galaxy and that it includes all the substances that make the world around us, the environment and everything else in the universe.

I felt really good when I visualized a young man in bright shining armour getting ready to battle with the forces of evil as a Soldier of Love. Perhaps it was the start of a healing that I’ve been looking for all of my life. Who knows?

Maybe the ever enfolding universe does . . .

(Workshop provided by the International Institute for Consciousness Exploration and Psychotherapy)