The Fourth of July is upon us and I wanted to share some independent facts that many Americans may not have learned in history books or in their classrooms.*

The Declaration of Independence was first printed in a German-speaking newspaper and not an English one. The Colony of Pennsylvania had a large German population and when people of what became the Keystone State voted on which language to use, German lost by only one vote.

Thomas Jefferson finished writing the document within three weeks at the Graff House at 7th and Market streets in Philadelphia. Initially the famous phrase for “inalienable rights” included the rights to life, liberty, and the pursuit of property. “Property” was what the Enlightenment philosopher John Locke suggested nearly a hundred years earlier in his treatise on government, but Jefferson and Philadelphia resident Ben Franklin both suggested the more upbeat term of “happiness.” 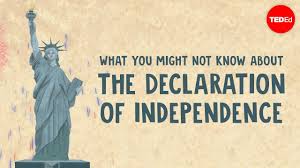 The oldest signer of the Declaration was Franklin, who was 70 years old. He also took part in helping to frame the Constitution written more than 11 years later. The youngest was 26-year-old Edward Rutledge. A lawyer from South Carolina.

When the document was read by the commander of the Continental forces in New York City, a raucous crowd cheered George Washington and later tore down a statue of King George III which was converted into 42,000 musket balls for the army.

In 1989, a Philadelphia man found an original Dunlap Broadside copy of the Declaration of Independence hidden in the back of a picture frame he bought at a flea market for $4. One of only a few surviving copies from the original first printing of the Declaration, it was in excellent condition and sold for $8.1 million in the year 2000.

Only one-third of the colonies supported the rebels.  Another third favored the Tories and the remaining third just didn’t care one way or another, according to John Adams of Massachusetts and the first vice president. He later became the nation’s second president. That figure has been raised to nearly 40 percent support for the Revolution and only 20 percent for the British Loyalists. The others were either neutral or kept a low profile.

John Adams and Thomas Jefferson died within hours of each other, on the 50th anniversary of the adoption of the Declaration of Independence, July 4, 1826.

Adams’s last words were ”Thomas Jefferson survives,” according to historical accounts. Jefferson had passed away hours earlier but Adams did not get the text message and he had muttered the words before typhoid overcame him. (Only kidding about the text message!)

11 comments on “Highlights of Declaration of Independence”