I’m down to just two more days now . . . Two more days in which to become enlightened through the 21-Day Meditation Experience of Deepak & Oprah. Today is the 20th Day. Tomorrow, I’m afraid, it will end for me and you.

No matter what happens though, I’ve been exposed to what Buddhists called the Dharma. That is, the “teachings” of meditation by Siddhartha Gotama, the person most of us call the “Buddha.”

It reminds me of a story I heard recently. It’s about a frog. The frog lived in the time of Siddhartha, at a time when the young man from Nepal had become an enlightened one. The Buddha was teaching a small group of followers at the banks of the Gaggara lotus pond when the frog heard his voice and wanted to get closer. The Buddha sat cross-legged in what would one day be called the “lotus position.” The little critter moved from one spot in the pond to another and could just about see the teacher. Still, the frog wanted to get even closer so that he could hear about the cessation of suffering, which we have come to know as the “Third Noble Truth.”

That’s when the frog hopped out and landed on dry land where he sat, legs behind his squishy little frog-like body, and took in the words being freely offered by this wonderful holyman.

A farmer from a near-by house then approached. He was a cow-herd who also wanted to hear what was being said in his native country of India. But as he approached the speaker, the cow-herd focused not on the ground where he was walking, but on Siddhartha. 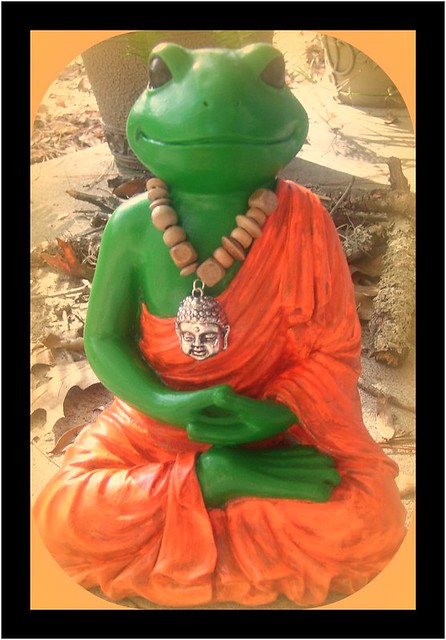 Anyone listening to Dharma today can become enlightened!

Leaning on his crook he crushed the poor frog that lay beneath him. As a result, the frog died and was reborn in the realm of the “Thirty-Three with a twelve-yojana gold Mansion [vimana] and [was] attended by nymphs,” according to reports published in a Dharma book.

That’s not the end of the story, however.

As the frog became a god he reflected on what deeds he had done to deserve all of this.  That’s what he realized that it was simply his attraction to the Buddha’s voice his brief exposure to the Dharma that did it!

Then the frog came down to the Buddha and honored him.

The Buddha then spoke:

Who, bright with psychic potency and entourage, with surpassing beauty making all the quarters effulgent, is honouring my feet?”

Then the frog (now a god!) explained:

I was formerly a frog, a water-denizen.  But while I was listening to your Dhamma a (young) cowherd killed me.

Those who for long have heard your Dharma, Gautama, it is they who have attained the unmoving place where they who go grieve not.

After this the frog became stream-entered, that is, he became a Noble Hearer.   After honoring the Buddha, the god (our friend the frog) returned to his celestial world.

(For more on the frog, please see the site where I gleaned much of this Dharma from: http://zennist.typepad.com/zenfiles/2010/01/a-frog-becomes-a-god.html)

2 comments on “The Enlightenment of a Dharma Listener”